The aim of this conference is to investigate whether and how non-epistemic factors can be of epistemic significance with respect to knowledge ascriptions. We are approaching this aim from three perspectives on knowledge ascriptions: their semantics, their functions (i.e. pragmatic role), and their reason-providing property.

Key questions to be addressed at the conference are:

What does it mean for a non-epistemic factor to be epistemically significant?

Which non-epistemic factors could possibly affect epistemic standards and how could they possibly manage to affect these standards?

Do knowledge ascriptions fulfill epistemic as well as non-epistemic functions; and does whether they do so depend on the ascribers’ epistemic or non-epistemic interests? 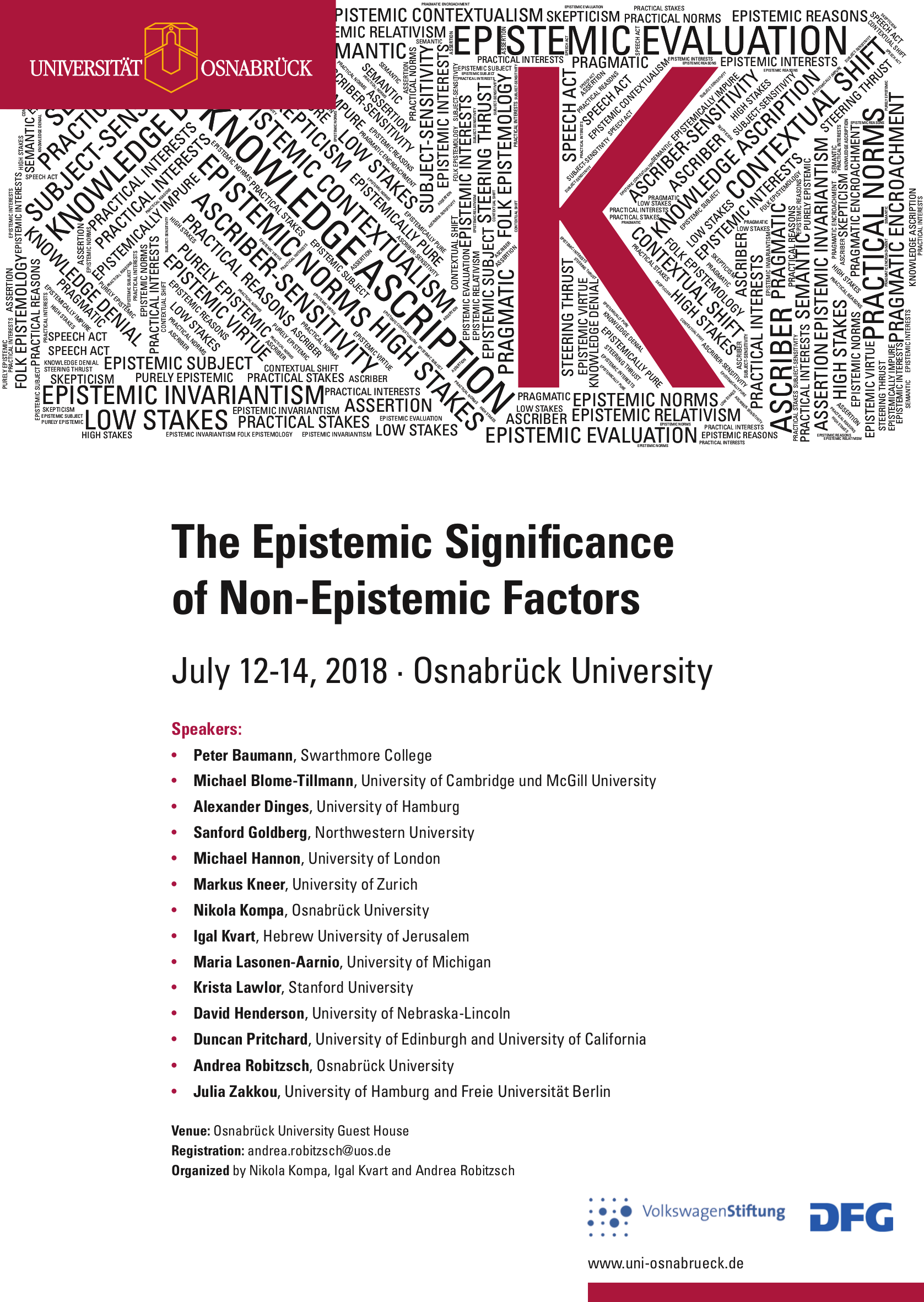 The conference "The Epistemic Significance of Non-Epistemic Factors" will take place from the 12th to the 14th of July 2018 at the Osnabrück University Guest House in Germany.

The address of the Gästehaus is Lürmannstr. 33, 49097 Osnabrück. You can find an interactive map of the campus here (building number 6). You will find a google map shortcut from the city center to the Gästehaus here.

There is no registration fee, but the number of participants is limited. If you want to attend the conference, please register by writing an e-mail with a short motivation to andrea.robitzsch[at]uos.de.

The notion of stakes and of other non-epistemic factors (salience, etc.) has played a big role in recent discussions of the concept of knowledge, and in particular in discussions of views like subject-sensitive invariantism (SSI). This paper starts with a closer look at the notion of stakes and proposes to distinguish clearly between negative, positive and neutral stakes. This also helps to clarify the relation between stakes and expected utility in (I think) interesting ways. Two main problems for SSI have to do with a somewhat underexplained notion of practical interests and a somewhat underexplained view of probability (which is also crucial to the idea of stakes). A third issue concerns the relation between stakes and other non-epistemic factors on the one hand and the epistemic standards they fix on the other hand. Fourth, and finally, SSI suffers from certain problems which are usually held against contextualism: It faces the threat of warranted assertibility maneuvers, has to deal with odd knowledge attributions and, finally, and most importantly, has to deal with a knowability problem. I also argue that contextualism doesn’t do worse on the above problems and does better on at least some of them.

In the first part of this article I propose and develop a novel reductivist account of knowledge-wh that can solve the problem cases discussed in the literature. The account is non-contextualist, non-contrastivist, and non-comparativist. In the second part, I argue that the proposed account provides us with an attractive invariantist explanation of certain data that are sometimes taken to motivate a contextualist account of ‘knowledge’-attributions—namely, the so-called contrastive ‘knowledge’-ascriptions introduced into the discussion by Jonathan Schaffer. Schaffer’s data do not establish that ‘knows p’ is sensitive to, as he puts it, ‘the question under discussion’.

Recent empirical studies underwrite the idea that our willingness to ascribe knowledge varies with practical factors such as what is at stake and time constraints. Anti-intellectualists use these data to argue for their theory, according to which practical factors partially determine whether a true belief amounts to knowledge. I will show that such arguments fail because intellectualists can explain the data in terms of epistemic anxiety (Nagel, J., Australasian Journal of Philosophy, 86/2, 2008; Philosophical Perspectives, 24/1, 2010). On this view, practical factors affect knowledge only because they have a causal influence on whether we form beliefs. The anxiety account has recently fallen into disfavor. I will argue that the worries are unfounded. When we look at the available data in the right way, we see that they confirm all major predictions of the view. I will add further studies of my own to fill some gaps. In sum, the anxiety account will emerge stronger than it ever was. I will also argue that intellectualists need an account like the anxiety account by showing that Buckwalter and Schaffer’s (Noûs, 49/2, 2015) recent attempt to deal with the data is bound to fail.

In this paper I argue that the data deriving from shifting stakes can be accommodated within an epistemically invariantist framework.  I do so by appeal to what I will call "value-reflecting reasons."  These are (practical and epistemic) reasons that are generated by our values (either what we value or the act of valuing itself).  On the assumption that shifting stakes can raise or lower the risks to what we value (or ought to value), we can appeal to such reasons to account for the impression that epistemic standards vary with shifting stakes.  If this is correct, the main source of evidence that some would use to motivate theories that endorse pragmatic encroachment can be explained away.

Why Purists should be Infallibilists
Michael Hannon (University of London)

Two of the most orthodox ideas in epistemology are fallibilism and purism. According to the fallibilist, one can know that a particular claim is true even though one’s justification for that claim is less than fully conclusive. According to the purist, knowledge does not depend on practical factors. Fallibilism and purism are widely assumed to be compatible; in fact, the combination of these views has been called the ‘ho-hum,’ obvious, traditional view of knowledge. But I will argue that fallibilism and purism are incompatible. The best explanation for fallibilism requires one to reject purism, while maintaining purism should lead one to reject fallibilism. It follows that the orthodox, traditional, obvious, ho-hum view of knowledge is deeply mistaken.

The Place of Non-Epistemic Matters in Epistemology: Norms and Regulation in Various Communities
David Henderson (University of Nebraska-Lincoln)

I seek to fill out the story behind gate-keeping contextualism and the place it envisions for non-epistemic considerations in epistemology. This will turn on the idea that what is required for the satisfaction of epistemic concepts like objective justification or warrant, and the concept of knowledge, can be understood as a matter of epistemic norms. These are standing epistemic normative sensibilities by which agents regulate both their own belief fixation and that of others in epistemic communities. This framework provides a perspicuous understanding of epistemic normativity, and subsumes epistemic gate-keeping as a dimension of our epistemic regulation of ourselves and others in communities. Epistemic norms are a hybrid kind of social norm—functioning both as widely shared customary understandings of state-of-the-art ways of forming (and sharing) true beliefs, and as paradigmatic social norms by which we in a community regulate the production of public goods (again a stock of true beliefs). Such norms reflect reasonable responses to the needs for veridical information within various communities, and reasonable expectations regarding how such goods are to be provided. These normative sensibilities are open to informed revision. Gate-keeping contextualism thus characterizes the ways in which we keep epistemic gate for various communities, and make demands on ourselves and others in a way that reflects both the reasonable error possibilities to be guarded against and the kinds of stakes faced by various engaged practical communities. Keeping epistemic gate, and regulating epistemic practice both individually and in communities, is a natural and fitting response to epistemic interdependencies characteristic of human life. The norms fitting to some communities or groups serially engaged with classes of practical projects will have developed normative sensibilities fitting to ranges of practical stakes commonly encountered there. On the other hand, general-purpose source communities will commonly develop sensibilities fitting to more diverse and thus higher ranges of stakes of those who might plausibly seek to draw on them—think of the sciences.

Assertions are speech acts by means of which we express beliefs. As such they are at the heart of our linguistic and social practices. Recent research has focused extensively on the question whether the speech act of assertion is governed by norms, and if so, under what conditions it is acceptable to make an assertion. Standard theories propose, for instance, that one should only assert that p if one knows that p (the knowledge account), or that one should only assert that p if p is true (the truth account). In a series of four experiments, this question is addressed empirically. Contrary to previous findings, knowledge turns out to be a poor predictor of assertability, and the norm of assertion is not factive either. The studies here presented are the first to provide empirical evidence in favour of the view that a speaker is warranted to assert that p only if her belief that p is justified.

In the paper, I will (i) claim (and have argued elsewhere) that there are contextually varying standards for how much it takes to reasonably count as a knower. It will (ii) briefly be argued that given that there is no context-invariant, absolute standard (except a skeptical or a dogmatic one), these contextually varying standards ought to be seen as determining truth- or correctness-conditions of knowledge attributions (qua utterances which are true/correct-in-a-context). I will thereby defend a version of epistemic contextualism. The remainder of the paper will be devoted to (iii) arguing that these standards result from weighing epistemic and non-epistemic needs and aims against each other. Consequently, the upshot will be that truth-/correctness-conditions of knowledge ascriptions have to invoke ‘impure’ epistemic standards that are the result of balancing epistemic against non-epistemic (such as instrumental, moral, etc.,) needs and aims.

Relevant Alternatives Theory is a natural account of knowledge, but it faces the problem of saying what makes an alternative relevant in any particular case. One promising idea is that a reasonable person standard (RPS) supplies the needed specification of relevance. But just what standard is invoked by the RPS exactly? Examination of the use of the RPS in the law allows us to reflect on the conceptual role and features of a RPS. Importantly, in the law, use of the RPS raises a dilemma: Is RPS a substantive standard, incorporating specific ideas about justification, or an “open” standard? If more open, then the standard creates uncertainty for disputants; if more substantive, then the standard proves less responsive to novel situations. A similar dilemma faces us in applying the RP as a standard of relevance. I argue that the best characterization of RPS in epistemic setting is an open standard. So the dilemma forces us to confront hermeneutical issues raised by invoking a RPS.

Support is canvassed for a distinctive approach to the theory of knowledge, known as anti-luck (or anti-risk) epistemology (e.g., Pritchard 2012; 2016). The goal of the paper is to consider whether such a proposal is committed to pragmatic encroachment, such that whether one counts as having knowledge significantly depends on non-epistemic factors (Fantl & McGrath 2002; 2009; Hawthorne 2004; Stanley 2005). The general thought in play here – see, e.g., Ballantyne (2011) – is that since pragmatic factors play an essential role in luck and risk ascriptions, then according to anti-luck/anti-risk epistemology they must likewise play an essential role in knowledge ascriptions too. It will be argued that once anti-luck/anti-risk epistemology is properly understood – where this means, in turn, having the right account of luck and risk in play – then this putative entailment to pragmatic encroachment is shown to be dubious. More precisely, anti-luck/anti-risk epistemology does not lead to pragmatic encroachment in any sense that should be regarded as philosophically problematic.

The conference "The Epistemic Significance of Non-Epistemic Factors" is financially supported by the State of Lower Saxony, Hannover, Germany and DFG.